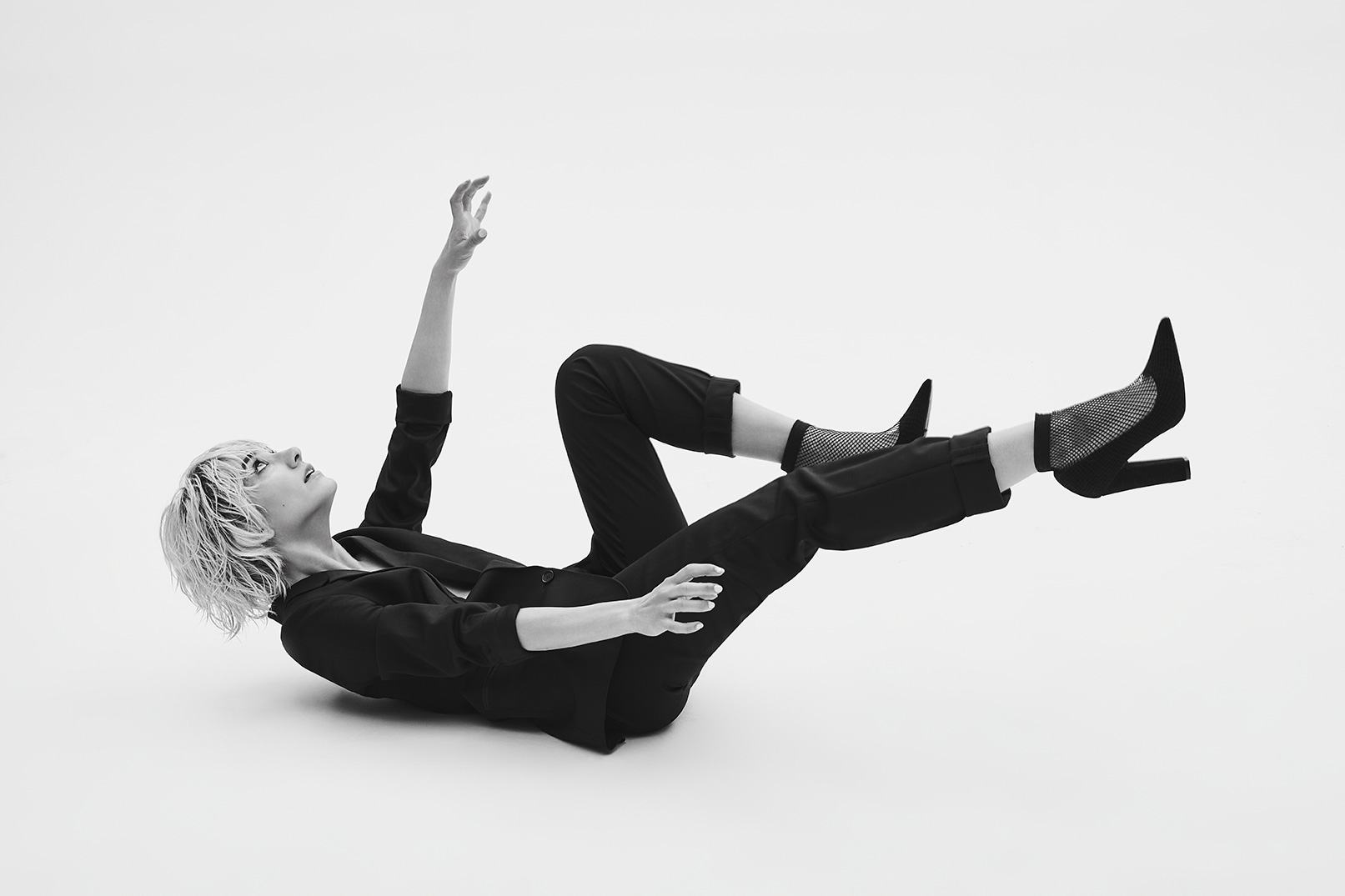 Blazer and pants by Saint Laurent Shoes by Alexander Wang.

Sheila Vand, the Iranian beauty has been working hard to prove herself as an actor. Her hard work and perseverance along with her undeniable talent have gotten her pretty far. She opened up to us about her childhood, what it was like working with Robin Williams and her latest projects.

Imagista: Can you tell me a little bit about your childhood?
Sheila Vand: I am a first generation Iranian immigrant, so it came with all of the things you might imagine being the kid of an immigrant. I had to discover a lot of American culture on my own, sometimes it was very difficult and sometimes it led to a lot of humorous things.

Imagista: What pushed you into acting? Was this a way of immersing yourself into American culture?
Sheila Vand: I don’t think that had as much to do with me being a little Persian girl as it did with me being a storyteller. I did grow up with a big Persian family and maybe that led to all the stories I had to tell. I was always the kid at the slumber parties putting everyone to bed with my stories. I was also a very sensitive kid with a lot of big feelings and I think, as I grew older it just made sense to have an outlet for all of those emotions and acting was a natural outlet for it.

Imagista: How old were you when you started to venture off into that world?
Sheila Vand: In middle school and high school I started doing plays, it was a casual hobby. When people used to ask me how I got into acting I would always say “it is the only thing I never quit” because I tried everything else. I tried instruments and sports and nothing besides acting ever stuck. I kept going and going and when it got time to pay for colleges, I sat down and thought about what I could imagine doing for the rest of my life and the only answer that did not depress me was acting. I majored in Theater in college and it was then that I realized it was more than a hobby. Acting is something I need in my life.

Imagista: Did you stay in California for College?
Sheila Vand: Yeah I went to UCLA. It was a good place to be. I studied abroad in Spain and when I was there I was not acting at all and that is when I realized I had to do this for the rest of my life. I got really depressed without it and when I came back from my semester abroad I just dove back into theater and it has not stopped since.

Imagista: You have worked with some pretty incredible people on some incredible projects. I wanted to ask you what was it like working with the late, great Robin Williams on Broadway?

Sheila Vand: It was one of the most memorable experiences of my life. I feel so lucky that I got to have that opportunity because he was such a generous person and such a generous performer. He is a legend and when I worked with him I understood why he was a legend. His brilliance just sort of oozed out of him. He had an amazing work ethic, he was always at the theater before everyone else, running his lines and he never stopped exploring the play and the role. He was always trying new things and trying to find new nuances and every time he wanted to try something new he would let the entire cast know so it would not throw you off your game.

I feel like anytime he had the opportunity to let us have the limelight he would give it to us. He never wanted to upstage anyone, even though he has the ability to dominate every scene, he never did that. I really respected him and saw in him the actor I hope to be one day.

He was so kind and so generous and so funny, obviously. It was also a treat to get to laugh every day at work. One time I made him laugh and I will never forget that because it may just be my greatest achievement career wise.

Imagista: You also appeared in the Oscar-winning film Argo with Ben Affleck, can you tell us a bit what that experience was like?
Sheila Vand: It is still pretty crazy to me that I was in a movie that won an Academy Award. You dream, as an actor that someday, maybe it will happen and it happened for me really early on which is a little hard to process.

That was another situation where I just feel lucky because the cast was so welcoming and down to earth. I was really young when I did it and it was my first studio movie so I felt like there was every reason to be intimidated but I wasn’t because everyone was just so warm with me. It allowed me to focus and do great work because I was not scared, I felt comfortable to bring humanity to that role, even if it was a smaller part.

I felt Ben Affleck gave me the space and permission to make it my own and I never felt like I was playing a small role. I felt she was important to the narrative. It was a great experience. He is an incredible director and the fact that he comes from an acting background really showed in his directing.

Theater is really exhausting when it comes to the schedule and it is almost athletic. You find yourself wanting the luxury of film and television. Then I will do film or television for too long and I feel like I do not have the opportunity to build momentum in a performance. You have to tame your performance in a way you do not need to do on stage. Each one satisfies a different part of me.

I have been doing mostly film and television in the past few years. I did a production of Hamlet last year because I did feel there was something missing and it was the theater.

Imagista: I know that you have a few projects coming out; can you tell me a little bit about each of them?
Sheila Vand: I am excited about so many projects. For the past two years I have been working so much and it is great to finally see these projects come to life. We The Animals that comes out on August 10th and I am so excited about that. It is based off an amazing book and it premiered on Sundance this year. It is the story of a mixed race queer kid coming to age. I don’t think there are enough of those stories out there right now.

It is also the story of a family that is living in harsh economic standings but doing everything they can to get by. For me it was exciting to play a part that was a little broken and rough around the edges because that is what I think it is to be human.

The main characters are these three young kids who were street cast in New York, they have never acted before and I think they are so brilliant. I am excited for people to discover these kids and see their work.

There is a show that I will be in coming out but I can’t talk about it too much. We filmed the pilot last year and all I can tell you is that the cast is amazing and incredibly talented. People are going to be excited to see them all in one show.

Imagista: With you being so busy, how do you managed to stay grounded and level headed?
Sheila Vand: It is a challenge and it is something I have had to prioritize in the last few years. Being an actor is really competitive and you do feel like you cant ever stop, like if you take a break you are going to be forgotten. For five years I have been on the hustle, saying yes to almost every job I get offered trying to establish financial security and career security. It got to the point where I was starting to burn out and I was noticing the effect on my performances.
I made a big change this year where I started to prioritize self-care and I do not say yes to everything. There are other things in my life that matter to me and I am learning as I am growing up that it is important to give back to you and protect yourself. I want to be a lifer as an actor and it will only be sustainable if I take care of myself.

Imagista: Has your family always been supportive?
Sheila Vand: They are so supportive and so proud. I think that they have a healthy distance from it at the same time. I really appreciate that I do not have stage parents who are googling me all the time. They are so proud of me and they see whatever I tell them to see but they are not overly involved.

Imagista: If you were not acting right now, what do you think you would be doing?
Sheila Vand: It is hard to imagine me doing anything that does not involve creativity in some way. I do want to get more into social work and philanthropy as I have more time and space to do that. The world is in a place where we need to be giving back more that ever, so I can see myself doing something like that.

I have also always been interested in theoretical physics. As artsy-fartsy as I am I was always very mathematical and academic. Sometimes I miss using my brain in that way and theoretical physics is the craziest thing; it is looking at the universe and thinking about science in an abstract way. For me I feel like science is what we use to try and understand the magic of existence and that is something I think about a lot. Sometimes I want to invest more of my thoughts and energy into that but it does not always align with acting.

Right now I am trying to write a bit more and take some of my other interests that do not have to do with acting and put it into my writing. It is really an excuse to research weird and obscure things.

Imagista: Can you tell me something about yourself that I can’t find on Google?
Sheila Vand: My go to karaoke song is Coolio’s Gangsters Paradise. I think I have performed that song many times and have given Oscar worthy performances when I do it. I have done it for groups of friends who are like “is that you? You just transformed into another person.” When I am Coolio my confidence skyrockets.

Imagista: So if ever they are doing a casting to play Coolio I think you should just go and rap for them!
Sheila Vand: I think that is a great idea!