Victor de Souza was born into a Portuguese family in Buenos Aires, Argentina. He was first introduced to fashion through his grandmother’s closet, which was filled with an elegant collection by designers such as Christian Dior, Balenciaga, Chanel and Schiaparelli. Seduced by the tapered silhouettes, brilliant colors and rich fabrics, de Souza knew at an early age that design was his calling.

De Souza made his debut couture collection at Paris Fashion Week. The showing was held at the American Consulate, as part of a special group event entitled “Americans in Paris.” This same year, editors and stylists began noticing his designs when Alicia Keys appeared at the NFL kick-off party in Times Square, wearing one of de Souza’s signature corsets. Around this time, Victor de Souza was commissioned to design the wardrobe for Mary J. Blige’s “Share My World Tour”. Other famous personalities such as Nicole Kidman, Jennifer Lopez, and Sarah Jessica Parker soon began to appear in his clothing.

The highly structural shapes and lines found in his clothes transform the pieces into armor for the everyday woman. His silhouettes are superbly tailored, elegant and sexy, while his colors are vibrant and his fabrics and embellishments add just the right amount of glamour. 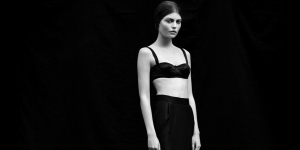