Tara is a Vancouver based performer, creator, dance-theatre educator, choreographer, and the Artistic Director of Tara Cheyenne Performance. In 2000 Tara began developing her own dance-theatre creations with director Sophie Yendole and composer and husband Marc Stewart. Her solo creations; bANGER-The Power Hour, Nick & Juanita-Livin’ in my Dreams (both awarded People’s Choice at the

Dancing on the Edge Festival), and Goggles have been presented across Canada, in the US, Belgium, London UK, and at The Edinburgh Fringe Festival DanceBase. Tara has been nominated for several Jessie Richardson Awards and an Ovation Award for
her choreography in theatre. Her latest creation, Highgate (a piece for five Victorian characters) will premiere at The Cultch, Vancouver in April 2013. 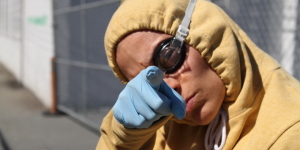