A self-described “painter who plays music” rather than a musician who paints, Richard Butler was born in Hampton Court, Middlesex, England. Richard studied painting at the Epsom School of Art and Design in England during the era of 70’s punk explosion. Like many others of his generation, Richard started up a band with some friends and went on to front the highly successful and critically acclaimed Psychedelic Furs.

Butler lives and paints in Beacon, NY. He is represented by The Freight + Volume Gallery in New York City. 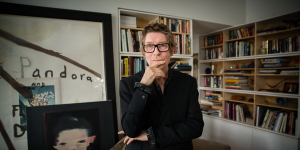