Poet, artist, writer, rock & roller, and now renowned chef, Paul Gerard, has been around the world fueled by his love for good food and adventure. Paul got his start early, at 13 in South Brooklyn, New York. Gerard worked in local restaurants as a busboy until his hair got too long and he was moved to the kitchen. It was an exile that would change his life.

The kitchens of New York in the eighties were home to many culinary vanguards & vagabonds, who found a home in the city’s restaurant basements, and they welcomed Paul with open track-marked arms.

They cooked because they loved it…or it was the only place that would have them. The dark counter culture took Paul right along with it. He climbed the ranks in the kitchen & on the street, playing in Rock & Roll bands and hanging at spots like The Nuyorican Poets Cafe. Gerard soon grew – both as a cook and as an artist, approaching food as he did the arts: studying, practicing, and revelling in every bit of the suffering and craft.

Determined to push every limit, at barely 20, Gerard’s desire to discover a life outside New York saw him heading South, to New Orleans, where his lifestyle found fertile ground.

For 13 lucky years he honed his skills under some of the greats before moving on for his life on the road, out of a suitcase and out of his mind, with cooking being the one blade of grass he held on to so not to fall off the earth.

Today, as owner and Chef of Exchange Alley in the East Village, Paul Gerard has come home. He has created a place that encapsulates the very essence of the underground scene of the New York of his youth. A place to drink, eat, laugh, and exchange ideas. 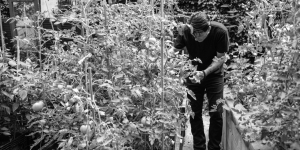