Snowy, windy, dark, cold and numb is just a few adjectives of where and how you
would find Montauk Based Aquatic Photographer James Katsipis. There is nowhere he would rather be then swimming off of the Montauk Point Lighthouse with his camera in the Middle of February after a fresh snow storm the night before.
James being born and raised in Montauk NY as a Avid surfer, shooting in water came natural to him. Using Montauk and the people in it as his canvas James shows what real local living is like year round.

A Senior Photographer for Eastern Surf Magazine, James has been fortunate enough to travel to exotic locations documenting life and surfing. He shoots a wide range of subjects from Surfing,Landscapes,Journalism, Portraits and Beauty. Having spread his wings after years of shooting wave riders, James has embarked on a new series combining his love of art and beauty with his passion for shooting in and around the ocean, incorporating beautiful women in his new series “The Mermaids Of Montauk”. He has been published in The Rolling Stone for his coverage of the aftermath of Hurricane Sandy in Rockaway Beach with Mike Diamond of The Beastie Boys. Eastern Surf magazine, Surfline, Stab Surf, Tonnta, Desillusion, WAX, Hamptons Magazine, Modern Luxury (Beach Edition) and The Usual Montauk (Patagonia) and others. 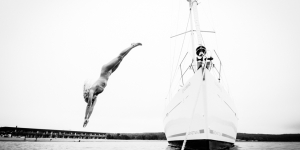