David Pattillo aka Strange Majik has been nominated for an Emmy for the “Live From The Artists Den” television series, produced the debut album of an up and coming Motown artist for super producer Linda Perry, and for the last few years has fronted The Dead Exs singing and crafting a blues guitar finger style in backwater dives around the country. He even hosted a year long UK radio show. He hails from NYC but was raised on rock n roll in South Florida. He’s hands on, old school, a fiend for sweet soul and rock n roll, and a man of wild ideas. He digs authenticity and a band that can bring the noise, rock the house, and reduce a grown man to tears. He works with indy bands in his NYC studio, has been know to mix a few big names here and there, and over the last year wrote and recorded his new LP “Lights On.” Vegan, outspoken, and fiercely independent he is a meditation junkie and a proponent of free energy. 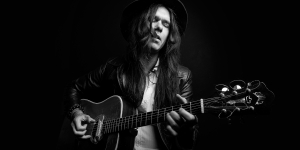