Free spirited model Charlotte Free was discovered while playing video games in an arcade in her hometown of Los Angeles in 2010. Her pink hair and intriguing demeanor have made her a favorite with photographic legends Terry Richardson and Mario Sorrenti. She has appeared in numerous magazines including Vogue, I-D, Purple, Numero and has walked the runway for designers including Jeremy Scott and Vivienne Westwood. 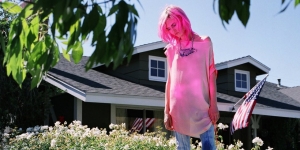