DJ, musician, and fashion muse, Alix Brown, was born and raised in Atlanta, Georgia by music-loving parents. After a 4-year stint playing in a band, touring the world, and running Shattered Records with Jay Reatard in Memphis, Tennessee, Alix decided to make the move to NYC. She immediately got a job at Academy Records in Brooklyn and began to play bass in Golden Triangle. The band gained great success, winning Battle of the Bands at SXSW, which led to being signed by the Sub Pop subsidiary, Hardly Art, and the band landing a song in an international BMW commercial. Just like many bands on top of the world, however, they soon dissolved. Having worked in vintage clothing and record stores growing up, Alix realized she had amassed thousands of records, a vast digital music library, and quite the jaw-dropping wardrobe. With such an impressive arsenal of pop culture artifacts, she began to pursue her career as a DJ and a vintage specialist. Since then, she has landed increasingly more high profile gigs at Kenmare, The Standard Hotel NYC, weekly parties with co-DJ Tennessee Thomas at Soho Grand, TriBeCa Grand, Hotel Chantelle; and parties for the likes of Maje, Helmut Lang, Pamela Love, Alexa Chung, and Sean Lennon. On the retail side, she has directed, styled, and started an online store for What Goes Around Comes Around in NYC, which is one of the most famous prestigious designer vintage stores in the country. 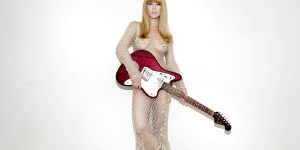