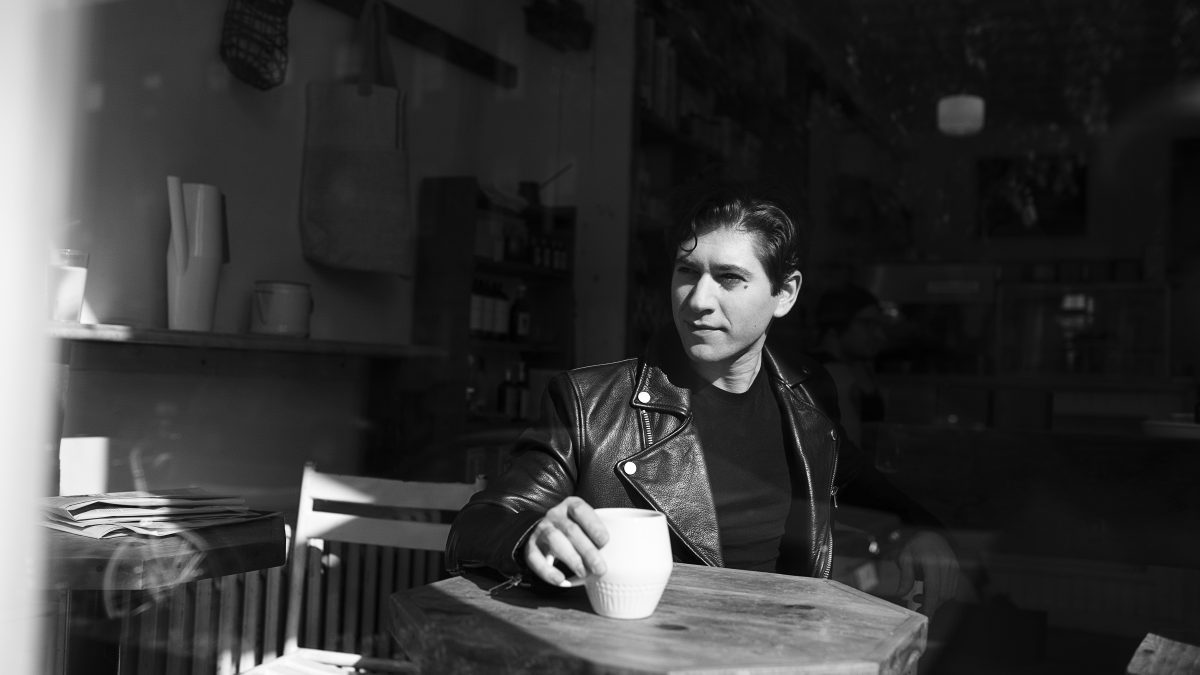 Jacket by The Arrivals, Pants by A.P.C.

MICHAEL ZEGEN
“I didn’t have a back-up plan.” Michael Zegen’s lack of planning may have been his best plan yet.

I glance up from my seat at a West Village restaurant to see a man staring at his phone, looking at his texts to see if the person he is supposed to meet is here. That person is me. I get up from my vantage point and announce my presence, at which point he looks relieved because when he’s sent to do interviews “I never really know who to look for.” That’s OK, because as a faithful viewer of Boardwalk Empire, I’d recognize the man who plays the lunatic Bugsy Siegel anywhere. As an actor who has worked in the acting trinity of TV, film and theatre, Zegen is not one to sit for long. Getting his start right out of college on The Late Show with Dave Letterman as Dwight the Trouble Teen – appearing in over 50 episodes – he has since racked up quite a few gigs under his belt, including the films Brooklyn and Frances Ha, the TV series Rescue Me, The Walking Dead and Girls in addition to a Broadway performance as Marco in Arthur Miller’s ‘A View from the Bridge.’

Growing up a mere half hour from Manhattan, it would have been easy for Zegen to come into the city to do auditions and potentially be a child star. But his parents wanted to protect him from that lifestyle and so Zegen had to be content with weekend acting classes. Clearly, they didn’t go to waste. Now starring in Amazon’s latest release, The Marvelous Mrs. Maisel, opposite Rachel Brosnahan as Joel Maisel, Zegen is the initially perfect-seeming husband who is also an aspiring comic. Things go downhill however when it is revealed that Joel has actually been ripping off another comedian’s material and, not satisfied with the life he’s living, shortly leaves his wife for his secretary. As someone with a background in comedy (he founded a comedy group at his alma mater, Skidmore College, in addition to being in the troupe Hottie$ Galore), I ask what he makes of Maisel’s poor attempt at comedy. “Well, a lot of comedians have been accused of plagiarizing. It’s sad in a way though, what did he think was going to happen? If he made it, would he have continued to rip off other comedian’s material?”

Created by Amy Sherman-Palladino and Daniel Palladino (the dynamic duo behind Gilmore Girls), the show takes place in 1958. Funny, sassy and sharp, it was “definitely one of the best pilot scripts” Zegen had ever read. “It’s so rare to read a script and laugh out loud! That was absolutely what drew me to audition for the show in the first place. I couldn’t wait to see where Marvelous Mrs. Maisel went!” Auditioning for the show, he thought he didn’t get it. The first audition went well but when he auditioned for the Palladino’s, he thought he blew it. “I walked in to the audition excited and nervous. When I want something badly I get really nervous. I thought I didn’t do as well as I could have done.” He received the “kiss of death” as he put it, being told “It was nice meeting you Michael, thanks for coming in.” He was actually in the middle of composing a message to his agents saying the audition didn’t go well when five minutes later he got an email asking if he could go in the next morning for a chemistry test with his co-star Rachel Brosnahan (who plays Midge Maisel). They sat in a room reading the script and it worked. The creators had found Midge’s husband.

As a show that focuses on a woman finally speaking out against what’s expected of her, the relevance of Marvelous Mrs. Maisel today isn’t lost on Zegen. “This woman has dedicated her life to being a wife and a mother. Now that that has all gone to shit, it’s like what is she going to do now? We see her becoming more progressive and being a stronger woman for it.”

Jacket by A.P.C., Pants by Levi’s, Shoes by Ben Sherman.