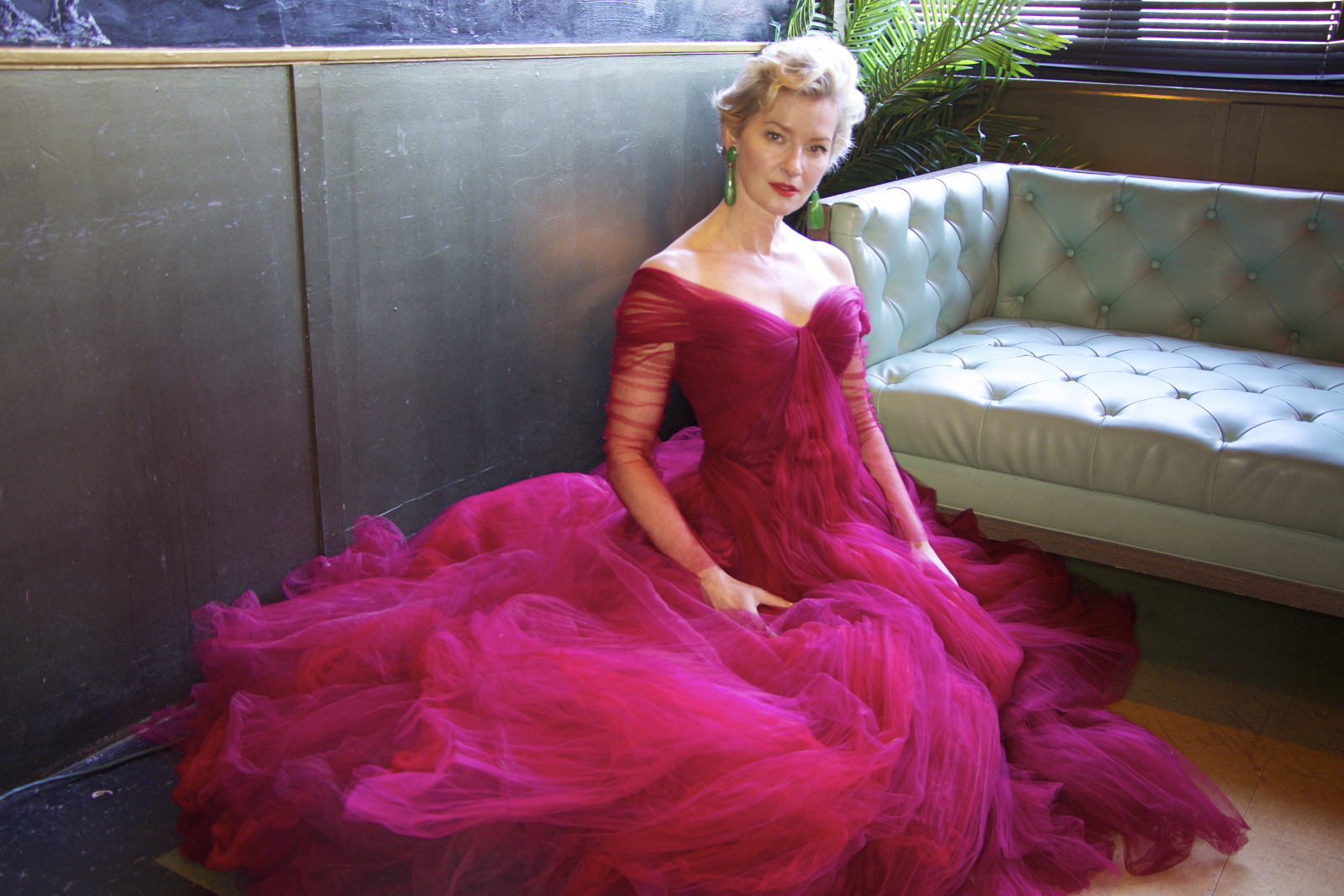 The iconic, elegant, and extremely grounded Gretchen Mol talks to Imagista about fleeing from malevolent forces in zero gravity, her dream of working with the Coen brothers (preferably in a musical thanks), and how to maintain a healthy work-life balance.

Imagista: Can you tell us what you’re working on right now?

Gretchen Mol: I have “Nightflyers” that just came out on Netflix. Nightflyers is a science fiction horror from George RR Martin of Game of Thrones fame, It was a short novella that he wrote that got made into a B movie in the 80’s. It was a hundred page novella that they’ve expanded into a 10 episode series that presumably could go on.

It’s a fun genre. I hadn’t really done anything quite like this. Doing it was taking a leap. I got to take my family to Ireland to film for six months where i got strung up and thrown around in a spaceship while I was there (laughs).

Imagista: Can you tell us a little more about your character and what was involved in playing the role?

Gretchen Mol: I was drawn to the role because the first eight or nine pages of the pilot are almost a short film unto itself where my character Dr.Agatha Matheson is being thrown around in zero gravity and then chased by someone. There’s all these objects being thrown around and there’s blood brain matter and all this other stuff. And despite her abject fear she’s trying to send a message back to earth warning that no one should board the spaceship. That sequence is the beginning of the end. It’s a flash forward.

Reading those pages sucked me into the piece. Here’s this woman who’s super active and she’s fighting for the greater good it seems – she’s sort of a heroine. That was very exciting to me.

Then I found out more about Agatha’s character. She’s a psychotherapist who’s been asked to come on the mission because of her telepathic abilities and that actually she’s not really that physically prepared for what she has to face. She’s sort of a social worker who has to deal with these ostracized breed of telepathic humans who are very feared on earth. The captain of this exploration think they might be useful to help make contact with this alien species. Her hope is that she can help people understand their value and help save an uninhabitable earth. This all takes place seventy five years from now when the earth is no longer inhabitable.

Gretchen channels her inner Marilyn in her own vintage dress.

Imagista: You seem to have a really great balance between work and family life. You husband is in the business too, he’s a writer, so my question is how do you manage to strike this balance?

Gretchen Mol: I always consider every role I take not just in terms of its value to me as an actor but also in terms of how it will affect my family. I have an amazing family and husband who, if there was something amazing that came along, regardless of where it filmed, that I could go do it.

Filming “Nightflyers” was perfect. This was one of the first times that I took everybody and it worked out so beautifully and was like a big family adventure. I even enrolled the kids in school there and the timing for that was perfect. Coming from New York City to rural Ireland was like a dream. Everything was simpler and it was lovely. I love the idea of taking a year off with my kids but that’s really hard to do. This was a way of doing it. It was hard to come back because we got into a rhythm there.

A lot of being an actor is that everything about your life gets put on hold for the time you’re filming. And then you go back to reality. I’ve found this to be the case with every job. Even the ones that filmed in New York. Even filming Boardwalk Empire was like that.

Imagista: You become like family with the people you’re filming with for that time don’t you?

Gretchen Mol: Absolutely you do. But at some point you realize that it’s also a job and you that everybody has separate lives and their own families. There’s always this affection and intimacy with the people you work with but then you go onto your lives.

Imagista: Have you and husband are both in the same industry but live in NYC. Have you ever considered moving to LA where most of the industry is?

Gretchen Mol: We actually did live there and we actually bought a house in Venice and lived there for eighteen months. But when i got pregnant with my son I hard this moment of clarity. I realized I wanted to be back on the east coast. My family is all here. I grew up on the east coast. My mom lives in Brooklyn. As an actor I’ve always felt more connected to New York and I like being in a town that isn’t just about one industry. I feel I’m able to have a better life balance in New York whereas in NYC I felt that the business was always around me. I might have sacrificed something for being here but I’m much happier and more grounded living in NYC.

Imagista: There’s the added bonus too that New Yorkers tend not to give a shit if someone is famous or not.

Gretchen Mol: That’s the other thing. I love it. I love that no one really cares in that way. The pressure that way is off. I was riding the subway today looking like hell with my hair all wet with rain. (Laughs).

Imagista: Is there anyone in particular that you’d like to work with who you haven’t worked with yet?

Gretchen Mol: Well first and foremost I’d love to work with my husband who’s both a writer and director. We’ve been trying to work together. We have something we’re trying to get going. The Coen Brothers would also, god, be awesome to work with. I love Inside Llewyn Davis.

The thing about their films is that you want to watch them over and over and you always get more out of them each time. You always laugh harder. They’d be great to work with.

I’d also love to do either a musical, a movie though. Not necessarily on Broadway. I did Chicago on Broadway years ago and I studied musical theater and I do sing and I feel that I’ve gotten better too. I find singing much more vulnerable than acting in some ways. I don’t know how I’d do that but I’d like to somehow.

Imagista: Well, put it out there to the the Universe and you never know. We could be talking a year from now about your musical.

Gretchen Mol: Yes! . We could be talking about my new musical a year from now.

Gretchen Mol: No, no, I’d rather do it in a film version. I love Broadway but it’s such hard work too!