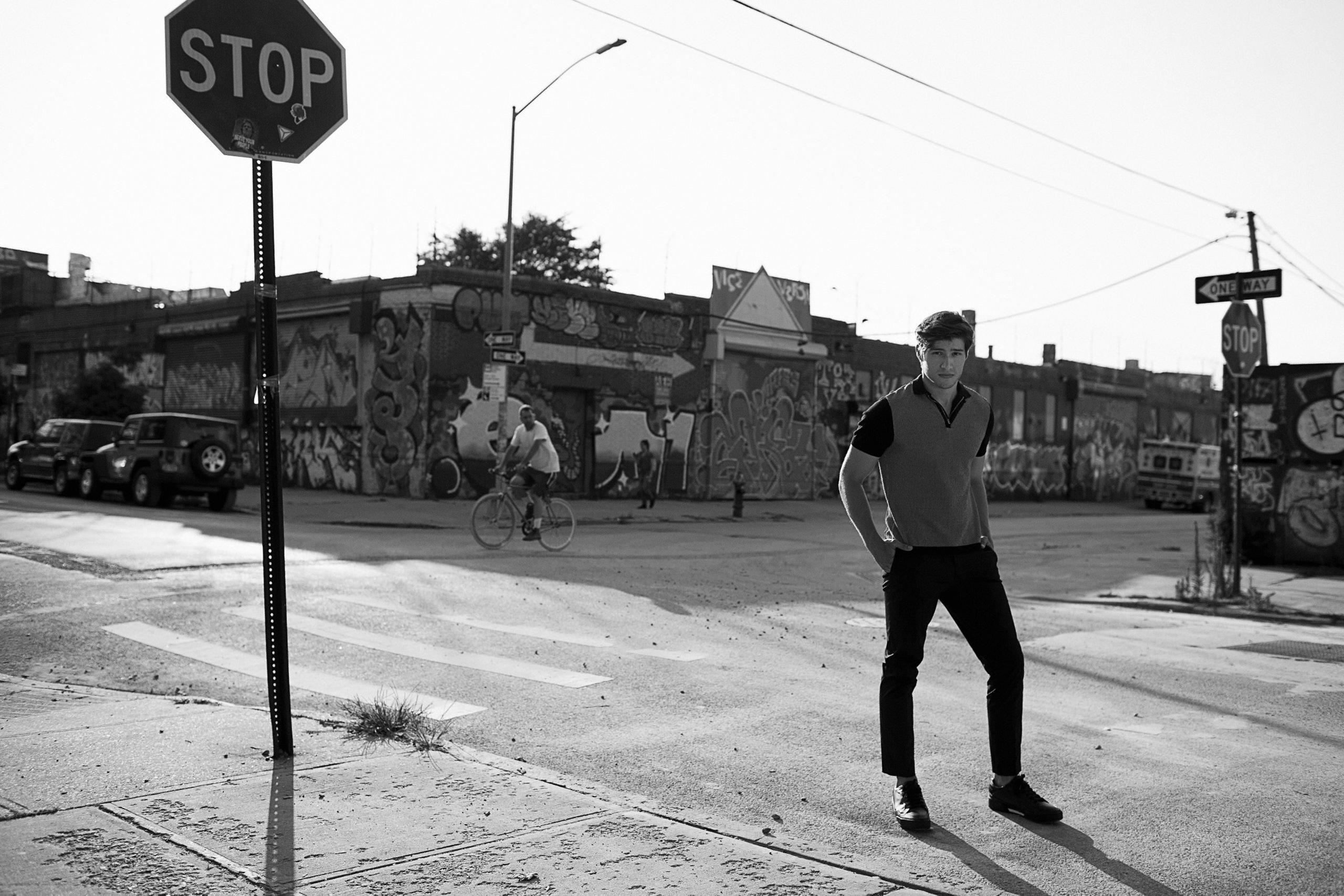 Grounded and wise beyond his years Cameron Cuffe takes nothing for granted. The hard working young actor talks to Imagista about life, acting, gratitude and playing the role of Seg (aka Superman’s grandfather) on the TV series Krypton.

Jacket and sweater by; EFM.

Imagista: You have been acting for quite a while, how did you get started?
Cameron: I always loved acting from when I was really young. The way my family spent time together was through watching movies. The first film I ever saw on the big screen was “A New Hope”. I always knew I loved film and I grew up in London, which was a great city for theater and culture in general.

When I was nine, I got cast in a short film and the energy of being on set and meeting these great people and getting to stay up late and do what I love most was addictive. I got paid 100 £ (pounds sterling) for that job when I was nine, which was a lot for a nine year old. That was the first time I realized that people got paid to act, I genuinely thought people just did it for fun.

Imagista: Well it sounds like you are living your dream, which must be a surreal feeling for you.
Cameron: I don’t believe in destiny but I do believe I have gotten incredibly lucky

Imagista: You have a new show called Krypton, what can viewers expect to see from you and can you tell me a little bit about that experience?
Cameron: Krypton was just the most wonderful experience. It is the Superman story, so to be a small part in the legacy of a character, which has been around for years and is viewed, as one of the most popular fictional characters was wonderful. It was such a cool experience to be able to explore a relatively untouched area of the history of Superman.

On set was incredible. The level of love and care that went into making ever element of this production was amazing. There was so much detail, from the graffiti on the walls, to the items that were in the market store, they all meant something, which is important when you are trying to make sense of a story.

The energy on set was wonderful and I honestly feel really lucky to have been part of an inspiring cast who are both talented actors and wonderful people. We have all become really good friends, which is really wonderful. There is not a single person in that cast that I do not love. It was a once in a lifetime experience.

Imagista: I heard you had to gain fifteen pounds of muscle for the role, how did you manage to do that?
Cameron: Yes I did. It took lots and lots of hard work. I was in the gym everyday for at least two hours. Weights, lots of boxing, Brazilian jujitsu, and MMA on a daily basis.

Imagista: Was your eating something you were monitoring also or was the muscle gained mainly at the gym?
Cameron: Huge amount of dieting was required. I stopped drinking and was eating pretty much only chicken and vegetables, and a lot of broccoli and spinach. It was a very boring diet but it was very beneficial.

Imagista: That is such a testament to your commitment to the role, both physically and mentally.
Cameron: I wanted it to all be authentic. I did not want to look good superficially; I wanted it to be practical for my role. When I started working with my trainers I said do not prep me to look good but instead prep me like you would for a fight. I trained like an athlete, which was actually really fun and ended up being helpful for the character because I ended up carrying myself differently, which happens when you go through that intense of a training regime.

Imagista: To you, as a young man, what is the hardest part about being in this industry?
Cameron: I constantly feel so lucky to be where I am. However, one of the hardest parts about being in this industry is rejection. The difficult thing as an actor and as an artist is that the work becomes personal to you and it is really hard not to take rejection personally. It is all a journey and it has been a wonderful one, I feel very fortunate.

Imagista: What would you consider the best advice you have ever been given about your craft?
Cameron: I think the best advice I was given, well it was not directed to me. I was lucky enough to attend a screening of “Eddie the Eagle” and Hugh Jackman was there and he gave a speech and he said that the reason the film was great was because it celebrated people who did things they loved not the things they necessarily feel they would be successful at. That struck a chord in me; you don’t enter into acting to get rich. That is a very bad idea. That is what it is all about for me, I do this because I love it and there is no other reason for it.

I remember the first week of filming I was having a very common feeling after being given your first big role, my first lead in a massive production and I was speaking to my girlfriend back in London and I was telling her I did not know if I could do this. I was worried people would find out I am a “fraud” and I couldn’t believe that I had finally made it here and I was full of fear that I would mess it up. She just said to me “but you love this” and I remembered that I do this for no other reason and it instantly put everything in perspective for me.

Imagista: That sounds like a good girl you have!
Cameron: What can I say, she is my Wonder Woman.

Imagista: I know that for you, passion has a lot to do with your motivation and inspiration in this industry but how else do you stay inspired?
Cameron: It all plays into my gratitude. I feel so lucky to be where I am. I feel like it would be incredibly disingenuous of me to complain or to do anything less then give 110%.

Yes, I work really, really, hard but there is always a place for me to sit, always someone asking me if I need anything. The people who are working makeup or in the camera crew show up two hours before me and leave an hour after me. No one is taking care of them to the level they are taking care of me so I see an opportunity every day when I get on set to be an example and to make it easy for everyone else involved. Mahershala Ali thanked his teacher when he won the Oscar for reminding him that acting is not about you. I think that is a tremendously important lesson that it is not about you it is about the job, the story and it is a team effort. When I am on set I give 110% and I try to always remember that I am part of a team and it is not about me.

Imagista: Besides acting, what are you passionate about?
Cameron: I love comic books, hence why this is an incredible role for me. I have always loved comics and as a kid I always loved movies. I think I was always looking for that next thing to help make my imagination move faster and comic books were always and outlet for me.

I have also always loved sports. I am a big sports fan, I love soccer and rugby and I have always been a big fan of watching the Olympics. A lot of artists turn their nose up to sports but I think sports are the closest things to art in the sense that it is one of the few things that no matter where you come from. We can all sit down and cheer on the same team. We can all sit down and appreciate something else that takes us out of our ordinary lives for a second.

I think when it comes to a dream role for me it is kind of like Moby Dick, the white whale, I do not know what it is or where it is but when I see it I will know. There are so many great scripts out there and I think for me, as a young actor there are so many things I want to do. I want to keep stretching myself, I want to take roles that are challenging and scary, that is how I will know I am moving in the right direction.

Imagista: Is that what we should expect to see from you in the future, different sides to Cameron?
Cameron: I hope so, if I am lucky enough that is what I would love to do. I would love to go back to independent film as well as theater. We are very lucky as actors to be able to take different opportunities and to stretch ourselves and I would love to take advantage of that.

Imagista: What can you tell us about yourself that we can’t find about you on the Internet?
Cameron: There is a really good quote by Charlie Chaplin, who can be considered the original film star in many ways. If someone asked him what the meaning of life is he responded with “What do you want a meaning for? Life is a desire, not a meaning.” This is something I live by because in life if have something you want to do you have to chase it. Life isn’t about pondering, it’s about living, and I try to put this advice into the way I live on a daily basis.

Shirt and pants by; EFM. Shoes by; Stella McCartney.

Shirt and sweater by; EFM. Denim by: Stella McCartney. Sneakers by; Billy Reid.