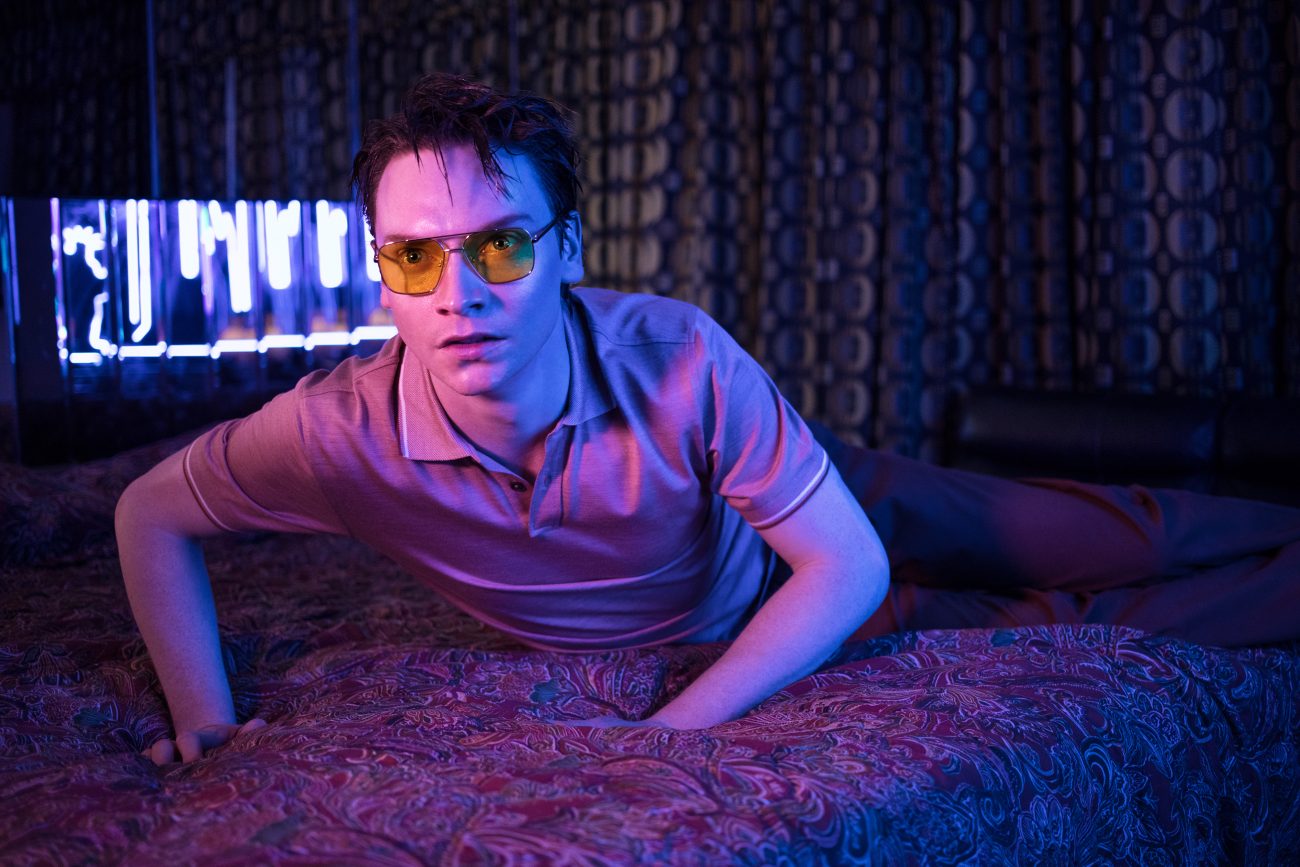 Smart, educated in his craft, well spoken and talented Calum Worthy is a Canadian born actor who is making big moves lately. You may recognize him from the new Hulu original series called “The Act” which is about the murder of Dee Dee Blanchard. The show is an emotional and disturbing tale based on a true story and Worthy, who plays Nick, a young man who suffers from Autism, who ends up involved in the middle of a murder.

Silk shirt by Land of Distraction. Trousers by COS. Boots by Florsheim.

Suit by The Kooples. Turtleneck by Land of Distraction. Shoes by Florsheim.

Imagista: How did you get into acting?
Calum Worthy: I got into acting when I was about 4 years old. My mom runs a theater company called Pace. So when I was really young she put me in the shows really as a necessity because she didn’t have a baby sitter. I think she thought that me being involved in the theater would be a great opportunity for me to grow as a child and she thought it would be a great way of me getting confidence and to dive into a world that is a little different. She had no idea I would end up doing it professionally. When I was about 7 years old a friend told me that there was an opportunity to be an extra in a Disney movie called Duke and I went in to meet with the casting director and they hired me as one of the background performers and I have not been of a set more than a few months ever since then.

Imagista: That’s amazing. I’m assuming your mom was supportive of you following this path?
Calum Worthy: She’s very supportive. I think she would be more supportive if I was a brain surgeon but she would have supported me no matter what. It is the same thing with my dad. My parents would support me regardless of what I did, they are just good parents.

Imagista: Who are your biggest inspirations?
Calum Worthy: Some of my biggest inspirations are the coaches I have worked with, early on especially. They really shaped who I am as an actor and how I approach the arts. Looking towards actors that I haven’t worked with would be people like Tom Hanks, Micheal B. Jordan, Denzel Washington and, of course, Meryl Streep and the other greats.

Another one is Christopher Plumber, a fellow Canadian. I remember reading his book when I was in tenth grade and it really shaped the way I see acting.

Imagista: You were on the show American vandal, what was that experience like?

Calum Worthy: American Vandal was an incredible experience. The creators of that show were very adamant on making sure it didn’t feel like a T.V show and wanted to make sure it felt like a real documentary. That was something that was an amazing opportunity for an actor, especially in the comedy space. All the actors approached it in a very method way. When we did the interviews, we would sit down for hours at a time and record these interviews straight through. We had what we wanted to say in mind but we wanted to make sure we had very authentic reactions in the dialogue as well. So instead of going scene by scene we just ran a bunch of scenes together, which were compiled into like a 2-hour interview. That was amazing because we were able to kind of settle into our characters. It was more like doing theater than it was doing a T.V show, which is very unusual for a comedy.

Imagista: Currently, you are on the show The Act that everyone is talking about, which is based on a true story, can you tell me a little bit about that?

Calum Worthy: The project itself was something that I was so excited to be part of. I had heard about this story even before I knew there was going to be a show about it. I remember being fascinated as the rest of the world was with Gypsy and Dee Dee. So I was just really thrilled to be able to be in such an interesting show with such a fascinating story line.

Imagista: It is a really heavy project to be part of, what was it like preparing for it?

Calum Worthy: Preparing for it was a very intense experience. The only way I could describe it was extensive preparation. I felt a massive responsibility to get this character right and I spent 2 months leading up to filming the first episode just getting a handle on who this complex individual was. I wrote an essay based off my research, I spent time at the center that works with adults with autism, I worked with a specialist and went over every element of the character, I read 5 books about autism. The research was very important to me because I knew that playing an autistic character was a huge responsibility and I knew that I wouldn’t be doing the character justice or the autistic community justice unless exhausted every resource for research.

I also went to Savannah a week before we started filming and I just settled into the character. I would walk around the town like him, I knew he had a lot of difficulties when it came to social settings and that he would easily embarrass and I wanted to know what that felt like.

It was great because my hair was dyed and cut very short, so people didn’t recognize me, which was a huge gift. I was able to just be Nick as soon as I got there.

Glasses by Moscot. Tiger print shirt by The Kooples. White jeans by Citizens of Humanity. Sneakers by Geox.

Imagista: There is so much going on in the show, what was the energy like on set? Was it very emotional or were you guys able to find some light during filming?

Calum Worthy: It was very emotional on the set. I felt like in order to do this character justice and to truly be a voice for Nick, I would not allow myself to leave that state as long as we were filming. There were moments as soon as we cut where we could relax and Joey and I would joke a little. However, while we were filming we both felt like it was our responsibility to do these characters justice and in order to do that we just had to be really focused and not really leave that emotional state.

Imagista: It is really an amazing show, so congratulations on that!

Calum Worthy: Thank you. One of the interesting elements is that leading up to it the first episode, all the scripts were already written so I was able to prep this character like I would prep a play. Where traditionally in television, you usually get one episode at a time so you can really only prep that block. I was able to prepare everything and memorize my lines before we even filmed the first scene that I am in.

It was amazing because I was able to do all the research necessary leading up to it. So when I actually stepped on set I was able to just relax and be the character and not even think about anything else.

Imagista: You have done theater, television, and film. What is the main difference between the three forms in your opinion?

Calum Worthy: There used to be a big distinction between television, film, and theater. I think theater and television are distinct because you can only capture the moment one time in theater and it is a shared experience but in television and film it goes through multiple channels and a lot of people get a crack at shaping that story from the filming to the editing. Now with television, with streaming services, they have taken the best parts of film and the best parts of television and put them together. That is one thing Hulu has done a great job with. A project like the Act is basically an 8-hour movie instead of a T.V show.

Imagista: Do you have a preference, between being on stage or in front of a camera?

Imagista: You are still so young and have such a huge career ahead of you, I know there are a lot of young actors looking up to you- do you have any advice for them?

Calum Worthy: My biggest piece of advice is to spend a lot of time learning the craft. I notice a lot of young actors just want to start working right away. I think it is really important to remember that it is an art form and while so much of the time we see artists synonymous with fame or fortune but the truth is if you are a true artist the key is to tell great stories and in order to tell great stories you need to understand storytelling. I think its really important to approach it with those values or else you could get pretty lost in this industry.

Imagista: Something we can’t find about you on Google?
Calum Worthy: I love smoothies, ill drink any kind of smoothie or milkshake, I am obsessed with them. I also love foods you can dip, like chips and guacamole or hummus and pita bread!