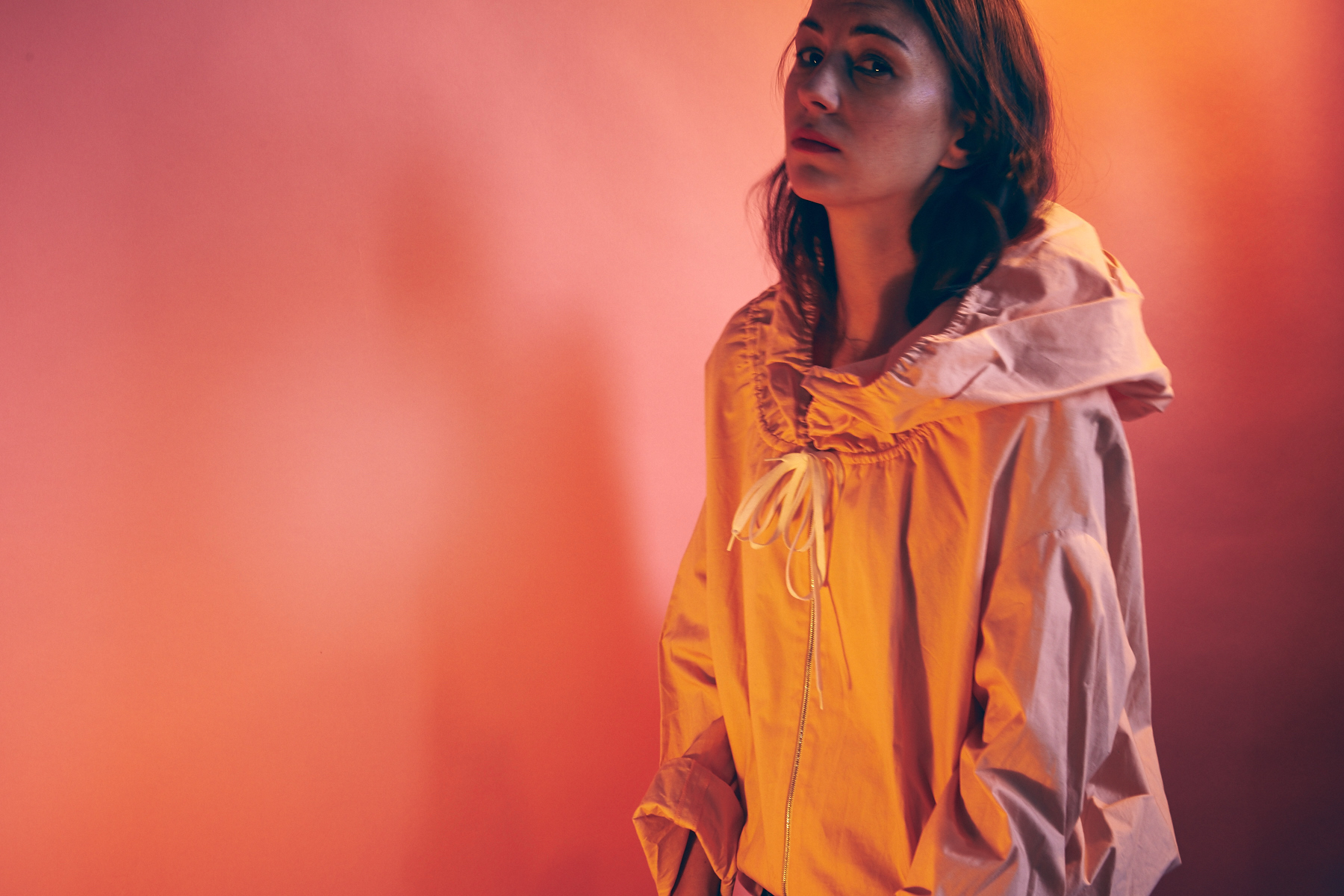 (Image above) Amy wears “Jasper Jacket” Anorak by A Détacher

“I chose Shark because I’m obsessed with sharks. ‘Jaws’ is my favorite movie.”
– Amy Shark

As a emerging singer hailing from Australia’s Gold Coast, trying to break onto the music scene wasn’t easy for Amy Shark. “It was really hard because there’s no music venues on the Gold Coast. No one cares about your originals, they just want to hear covers, they don’t want to hear your own stuff.” Now, with her song ‘Adore’ voted at number 2 in Triple J’s 2016 Top 100 and fresh from winning two Aria awards both for Best Breakthrough Artist as well as Best Pop Release, things have certainly taken off for the Queensland native. Currently finishing up her debut album for her world tour taking place later in January, the last few months have been all a-go for Shark, including supporting the global pop phenomenon Sia on her Australian tour late last year. Fronting someone who is notoriously shy was not unrelatable to Shark. In fact, it took Shark a while to be confident enough to sing in public. “You had to have a lot of confidence to be like, ‘hey everyone, listen to me sing!’ I did a lot of theatre in school and was confident enough to act but singing for me was something completely different. It’s like baring my soul because I’m essentially reading from my diary.”

Catching her between album recording breaks, Imagista talks shop up with the upcoming Aussie sensation.

Imagista: How did you get into music?
Amy Shark: Well, my family always loved great music and I grew up listening to the likes of The Smashing Pumpkins and The Police. I just got obsessed from my Mum and Dad playing awesome songs. My grandparents really wanted me to learn an instrument but that was when I was fifteen and I just wanted to hang with my friends. It wasn’t until they got my brother this amazing electric guitar that I was like, hey, I want one too! So then I started learning. I was really lucky to have a great teacher. He taught me all these cool riffs and I just became addicted.

Imagista: Have you always written your own songs?
Amy Shark: As a kid never thought I had it in me to write my own songs. I always looked at artists and bands thinking ‘wow, that’s such a talent, I’d never be able to do that.’ But then in high school I started out writing comedy songs, I also had a few relationships that went shit and I’d write poems about that. But I wouldn’t show anyone because it just wasn’t what anyone did. You had to have a lot of confidence to be like ‘hey everyone, listen to me sing’. It wasn’t until a few years out of school that a guy I was seeing booked me into this songwriting competition and I had to sing.

Imagista: Wow, so basically it’s due in part to him that you’re where you’re at with your music career right now?
Amy Shark: Oh yeah, he’s like my biggest champion. I knew I loved to write songs and play the guitar but he was the one doing the admin, like contacting labels and managers, organizing funding, everything.

Imagista: Well, they say ‘teamwork makes the dream work’ after all! Can you tell us what your hit song ‘Adore’ is about? Is there a process to your songwriting?
Amy Shark: ‘Adore’ is like a play-by-play of a night out I had. When I write I sort of don’t know what I’m going to write about. I just fumble around on the guitar until I find a melody I like, something unique and then I just kind of start mumbling words to it. Or sometimes a line will pop into my head and I’ll note it down in my phone. But this song I wrote in ten minutes. I was remembering different parties I went to in high school. I had so much happen to me in such a short period of time: I had a bad break-up, friends diminishing, stuff happening at home. It was an angsty period. I was remembering that time and, like how I normally write, I kind of cherry pick moments, and ‘Adore’ is based on one moment in particular that was really sweet, just hanging out with a boy, obsessing over him, not wanting him to leave. You don’t really get that moment again, that feeling you have when you’re 16 and you like someone a lot and it’s all new. It’s not the same when you’re older.

I definitely didn’t write it thinking so many people would connect with it. There are so many songs out there that are like ‘girl power’ and ‘I don’t need you’, etc. but I’m like that sad desperado girl who will tell the boys how much I like them. I tend to wear my heart on my sleeve.

Imagista: Why did you want M-Phazes in particular to produce ‘Adore’?
Amy Shark: I heard an interview with him one day where he was talking about how he wanted to do more pop and I just knew that this was the guy I needed for my music. I had to beg his management to try and get him to produce my song. I didn’t have the money at the time so I had to apply for a government grant. I didn’t get it the first round so had to do write out the grant again, which is like 57 pages. He was working with really big artists so I was like nothing to him, he was doing me the favor. Eventually it all worked out and when I got the song back I was like yes, this is exactly what I wanted. The big hip-hop beat behind the melodic, melancholic song.

Imagista: What would you say is your favorite song on your EP?
Amy Shark: ‘Drive me Mad’. I think it’s because it was the first time that I really looked at myself. I had a moment where I realized I was being a really difficult person, I was having arguments with everyone. And one day I was like I think it’s me, I think I’m the problem here. I just had an epiphany where I realized I’m not an easy friend, not an easy daughter, not an easy person to be in love with. And I was really beating myself up about it but it was so refreshing, I felt like I had apologized to everyone through this song, that I had admitted that I know I’m enough to drive you mad. I was really happy with the melodies. The way I wrote that song was different to others I had written previously. When we finished producing the song, it was exactly what I wanted: it’s comfortable and it’s alarming, it’s such a push-and-pull song.

Imagista: Women in particular always feel the need to apologize.
Amy Shark: I know, but at that stage in my life I knew I was the common denominator. My birth father is the perfect example of someone who thinks he is the best person – he’s so arrogant. So I do a check-in with myself every so often: “don’t be an asshole, just be a good person. You’re not perfect so don’t think you are.” I’m always doing that so that I’m not like him.

Imagista: That’s a very humbling check-in indeed! You’re real name is Amy Louise Billings – why ‘Shark’?
Amy Shark: I just want to detach myself from my family when I perform – with an alias I feel like I can let loose. But I chose Shark because I’m obsessed with sharks. ‘Jaws’ is my favorite movie. I watched ‘Jaws’ early on in life, I think I was eight years old and it scared the shit out of me. I had nightmares every night – essentially I’d go in a boat with my grandad, a shark would knock the boat over, we’d watch the shark eat my brother and then my grandad would go in the water to save him and then he’d get eaten and then I’d be stuck in the boat. I’d wake up with nosebleeds, go back to sleep and have the dream again – it was awful, so messed up. It mentally disturbed me for so long but then I watched Jaws again and then Jaws 2, Jaws Revenge…I don’t know, I was just torturing myself. So eventually I grew up, the dreams calmed down. But my obsession with them never faded.

Imagista: So, if you weren’t a singer, would you be a marine biologist specializing in sharks?
Amy Shark: No, I read about them enough that I don’t need to study them. But I’d love to go to South Africa and do a shark dive one day, or else just go out on a boat and visually see them – I just love watching them.

Imagista: Wheeling an obsession into a stage name is perhaps not the most uncommon thing. So, you had your American TV debut last November on the The Late Late Show with James Corden – how was that?
Amy Shark: Performing on his show was awesome but also surreal – I was in a room with Kim Kardashian on one side of me and Ludacris in another! It was a moment where I was like, am I supposed to be here?

Imagista: If you had the opportunity to do Carpool Karaoke with Corden, what songs would you choose and why?
Amy Shark: I’d do ‘Shoop’ by Salt ‘N’ Pepa, a million Eminem songs. Backstreet Boys and Spice Girls would also feature for sure. I’d choose these songs just because they’re fun – I’d wanna give him an experience he’d never forget and I could totally imagine him getting into it.